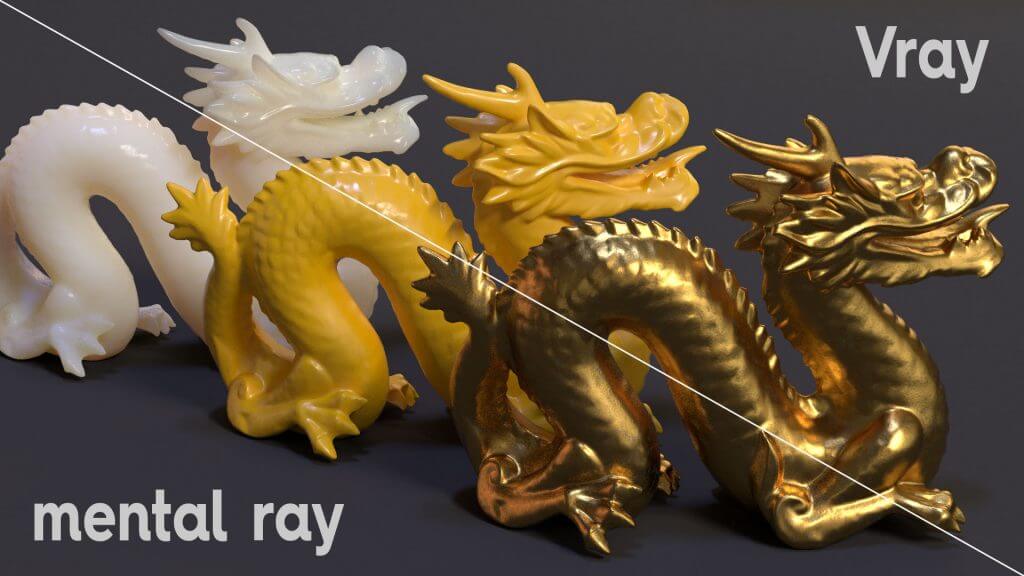 Over the past few months I have been playing around with Vray for Maya, and also with adapting the material design method popularized by Grant Warwick to a Maya workflow. So far, my experience with Vray has been mostly very good, and I find it significantly better than the mental ray experience in Maya. Here are some of the advantages that I found to be extremely beneficial in everyday use:

Aside from cost, one of the biggest reasons that I stuck with mental ray for so long (and I have tested Vray in the past several times, as well as other render engines), has been the fact that it offered support for pretty much everything in Maya. It has a strong set of essential and advanced features for production use, and it renders pretty fast once you learn how to use the settings.

However, now that Vray has decreased its render time significantly with version 3.0, the render times are either pretty much on par with mental ray, or even faster. This, in addition to the fact that it is so much more reliable and stable, makes it a no-brainer as the renderer of choice currently as both a CPU and GPU solution.

There are still some important differences that give mental ray some advantages, aside from the obvious cost difference.

One is the more extensive support for some of Maya’s features like fur, hair, xGen, bifrost, and fluids. With Vray, there is often a need to rely on additional plugins for support of similar features. An important example is fur. Although Vray has its own fur implementation, it is somewhat useless for characters, as it doesn’t have any grooming features. It does offer support for XGen, which could work, but XGen comes with its own problems currently. It seems like the only other option would be Yeti, which not only is not available for purchase in NorthAmerica, but it would be a pretty expensive additional purchase for independent artists.

Another difference, which would be an advantage in some situations, is the current implementation of the SSS shaders. They act quite different from eachother, and I found that for characters, the mental ray SSS shaders seem more suitable generally. They respond better to light, and offer better control over the scattering.

For a simple comparison, I put together a scene featuring the Stanford dragon scan, and some basic materials. The aim in this scenario was an exercise in trying to achieve the same look with both render engines.

The render setup included my workstation + 4 render nodes in distributed mode for Vray, and the same nodes using the satellite system for mental ray. I first set the scene up in Vray, with the following settings:

Then I tried to recreate the same setup for mental ray, using the following:

To keep results consistent between the two engines, I didn’t use any custom camera lens mapping or colour mapping in either setup. This means that in Vray I didn’t switch on the Physical Camera attributes, and left the colour mapping at the default Linear Multiply. In mental ray, I didn’t use either the photographic or the simple lens node.

The materials in both instances share pretty much the same nodes for controlling the specularity, glossiness, and bump. One big difference between MILA and Vray Material is the way glossiness is controlled. They are backwards (Vray has sharp glossiness at 1, while mila has it at 0), and they scale differently from each other, which required different mapping nodes for the difference in values.

The noise maps are procedural 3D Fractal and Cloud maps, which is why they look slightly different in the Vray render from mental ray. Vray doesn’t have access to the code for the Maya procedurals, so it creates its own version trying to stay as similar as possible. I couldn’t use texture maps, because these models do not have UVs, and I wanted to test the procedural noise maps in Vray anyway. 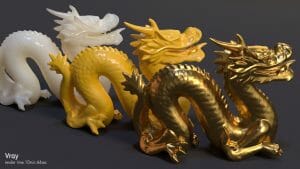 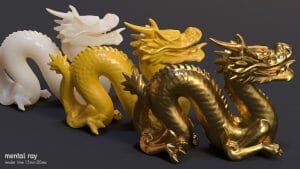 In order to replicate more realistic reflection frenel curves, I was inspired by Grant Warwick’s tutorials in Mastering Vray, and tried to recreate the techniques in Maya. I won’t spend time here to explain the need for such custom curves, as he does a very good job. Instead, I just want to focus on the method I used to adapt the system from 3DSmax to Maya, and from Vray to mental ray.

The greatest challenge in adapting the workflow was figuring out how to create an equivalent to the custom curve nodes that 3DSmax provides. For that purpose, I chose to rely on the very useful remapValue node in Maya.

Basically, I start by hooking up the facingRatio output from the samplerInfo node into a reverse node, so that 0 becomes the front facing angles, and 1 becomes the edge angles. Then I take the output from that reverse node and plug it into the InputValue attribute of the remapValue Node. Then I customize my value curve by plotting points manually to control the shape, and then plugging the outValue attribute to the reflection attributes of the materials. This would be either the Reflection Amount for the Vray material, or the Weight attribute for the MILA materials.

Here you can see an example of how the remapValue curve looks for the plastic reflection: 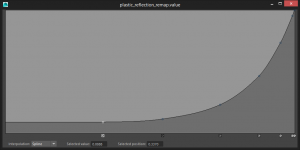 These images show the material graphs for the mila plastic setup, and the Vray plastic material setup respectively. 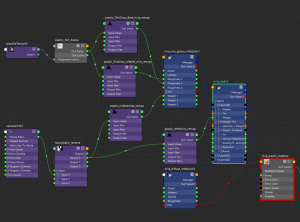 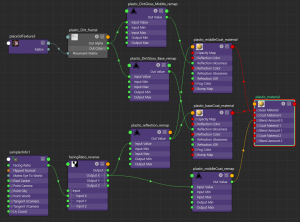 One thing to note is that the facingRatio attribute from the samplerInfo node does not output a perfectly linear result. To get a more accurate ramp of the values from the front-facing angles to the side-facing angles, there would be a need for another adjustment curve to be applied, before the result is plugged into the custom remapValue node. This can be done with another remapValue node. However, I chose not to bother with it, as the change isn’t huge. I would only bother with it if I need absolute accuracy in reproducing specific material properties. In the large majority of cases, I have to make subjective visual adjustments anyway.

Overall, the setup was just as easy to put together on both platforms. The new advances in mental ray for Maya have made it much easier to set up an IBL solution, and the mila materials are pretty easy to use once you get used to the new system. The biggest problem I had in the whole process was actually getting the mental ray satellite for Maya 2016 to work properly for Service Pack 2. It turned out that there is a separate install for it specific for SP2, which wasn’t showing up on the Subscription page at Autodesk. It has to be downloaded separately from another page, and to make things even more confusing, the file isn’t labelled specifically for SP2.

The render times were somewhat similar, with Vray tending to produce cleaner results overall in less time. The only problem with the Vray render was actually very apparent noise on the flat shaded floor area. The noise came from the LightDome samples, which had to be raised to 128 to produce a relatively clean result on that surface.

The mental ray render, on the other hand, produced perfectly clean shading on the floor area even at very low render settings. However, it also generated heavy noise on the gold material at low environment light quality levels, which is still apparent in this render. With the new mental ray sampling quality attributes in Maya 2016, I actually had a much easier time tweaking the sampling settings for my Vray render, to prevent the sampler from working too hard. I was at a bit of a loss in optimizing the sampling in this new version of mental ray, and I suppose it might be possible to lose that IBL noise without an increase in render time.

Another disadvantage of the mental ray setup was the more limited FinalGather solution, which was much slower in generating a similar amount of bounced light in the scene as the Vray GI. In the end, I just decided to reduce the FinalGather settings a bit and reduce the render time significantly. This is also why the Vray render shows brighter, more yellowish shadows on the plastic Dragon. It is the GI at work. The mental ray render can achieve a similar result with more accuracy in the Final Gather settings, but at the expense of more render time.

A surprising difference between the two implementations was actually the stronger colour from the Blackbody node in mental ray, which produces more saturated tints than the Colour temperature setting in the Vray light. They were both set to a temperature of 4500K, but for some reason, they render slightly differently. This is why the mental ray render appears slightly more reddish in the top right section.

In the end, the new MILA material has proved to be a mixed bag in my opinion. On the one hand, it allows layering of various material attributes in a fairly simple fashion. On the other hand, it took me a while to figure out how some of its features worked, and the node linking takes some getting used to. It feels like it added simplicity and functionality on one hand, and made things more complicated on another. It also doesn’t delete the nodes once the layers have been removed from the material, which is kind of annoying. However, the render time improvements should be worth the trouble.